Well, I've been in Myanmar for over a week now and I finally found some time (and reliable WiFi) to get some words and pictures on the blog from the two weeks I spent in India. Since I'm pretty sure that I don't have a short term memory any longer it becomes more and more important that I get these blog posts done earlier rather than later.

The CLC helps to facilitate an annual Joint Asia Pastoral Conference (JAPC) in India each year. This conference includes pastors and leaders of CLC affiliated church bodies from India, Nepal, and Myanmar. It is typically held in October but it was moved to February this year so that I could attend. There was also some encouragement from the Nepali delegation to move it to a cooler month since they are not too fond of the hot and humid October weather of South India. The dates of the conference were February 6-8. We work with two church bodies in India and they take turns hosting the conference. This year it was hosted by the BELC.

In addition to pastors from the Berea Evangelical Lutheran Church (BELC), the Church of the Lutheran Confession of India (CLCI), the Himalayan Church of the Lutheran Confession of Nepal (HCLCN), the Church of the Lutheran Confession of Myanmar (CLCM), and the National Lutheran Church of Myanmar (NLCM), the conference was attended by our CLC Missionary to India (name purposefully ommitted), Pastor Tim Daub of Hecla, SD, and myself. Each church body presented reports on the work they are doing. Pastor Daub presented an essay on the Confession Lutheran Approach to Biblical Interpretation and Missionary E. presented an essay on Blessings from God. Pastor Charles Edwards (NLCM) presented an essay on the History of Christianity in Myanmar. Pastor Jyothi presented an essay on Abortion in light of the Bible. I had the privilege of presenting an overview of all the mission fields where the CLC is working.
Following the conference Pastor Daub returned to the U.S. and I spent the next few days with Missionary E. visiting a few of the districts of the BELC to teach on-going pastoral training classes and visit with several of the district leaders of the BELC. I have known these men for over twenty years now. I consider them some of my dearest friends and fellow servants in our Savior's Kingdom. I count it a very great blessing from the Lord to be able to visit them in their homes and see how their children have grown.

Missionary E. and I also had the privilege of being invited to participate in the dedication of a new home and to help celebrate a 60th wedding anniversary of BELC members.

I then traveled north, by train, to meet Pastor Jyothi of the CLCI. I was fortunate to be able to preach at an evening Ash Wednesday service at the CLCI headquarters. They also had quite a welcome ceremony planned with singing and dancing by the children. I also got the chance to greet and visit briefly with Pastor V.S. Benjamin and his wife Mary. They are both getting well advanced in years and have had a number of health problems recently. Mary was admitted to the hospital while I was there and was treated for a rather serious kidney infection. She has since returned home on medication and will be re-evaluated in a month with the hopes that they can avoid dialysis or surgery.

I have to be careful not to mention the specific names of some of the places where I visited and preached because the local government in some of these areas have decided that the current political situation with the pro-Hindu majority party in India presents an opportunity for lining their pockets.

One rather unique experience I had while working with the CLCI was the opportunity to visit a somewhat remote fishing village where there are twenty-five families living. Only one family is Christian, but the father of this family (who was recently converted from Hinduism) is quite diligent in his efforts to proclaim the Good News of Jesus. The CLCI hopes that they will be able to establish a congregation there at some point in the not to distant future. We traveled with the Christian fisherman using the boat that he and his partners rent as commercial fishermen. We traveled to visit a few areas near the village and enjoyed a lunch on a beach. It was low-tide and so the beach was exposed along with lots of crabs running around but nothing else. All you could see from the edge of the this little strip of land was the open waters of the Bay of Bengal.

There is always the chance in this part of India, under the current pro-Hindu anti-Christian government, that opportunistic police officers will stop the foreigner to see if they can find a reason to line their pockets. So, we stopped at an ancient Hindu temple carved into the side of a stone hill so that we would have some proof of visiting a tourist attraction. This was carved more than 1,000 years ago and is still considered a very holy place by Hindus today. 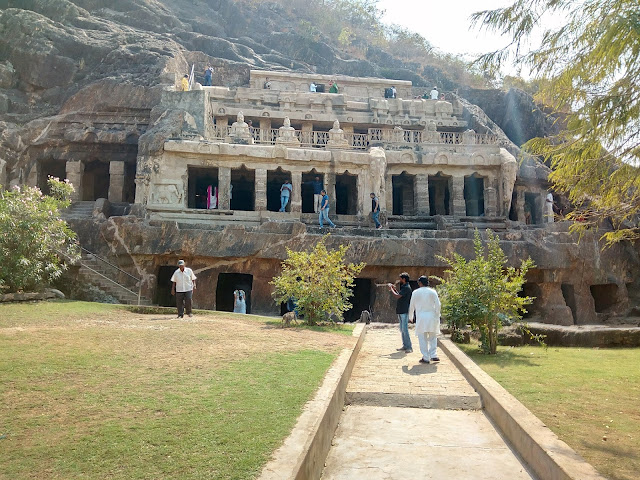 Even amid the government crack-down on Christianity mentioned above, the doors of opportunity to train faithful pastors to proclaim the truth of God’s saving word and start new congregations is overwhelming. There is seemingly no end to the opportunities before us. Pray that the Lord would provide the necessary resources, man-power, courage and zeal to continue in this harvest field that is so ripe for harvest.

After six very busy days with the CLCI of teaching in the mornings and preaching at two or three locations each afternoon/evening I boarded a plane that took me from Vijayawada to Hyderabad in India and then to Singapore and finally to Yangon, Myanmar where I met up with Pastor Dave Koenig. We've been here for a little more than a week and we have about five more days to go until he returns to the U. S. and I continue on to Nepal.